The Air Shark was an original invention of Dave Hargrave, and appeared in the Arduin Grimoire Volume 1. Years before Sharknado! I wonder if anyone who worked on Sharknado ever heard of Dave Hargrave? This is my reimagining of the Airshark for 5th edition Dungeons and Dragons.

I also did a write up for a Dungeon Crawl Classics version of the Air shark.

Imagine a great white shark that moves through the air! Airsharks are sometimes ridden by Lizardmen, goblins, and orcs. With a rider, the rider can make an attack from the mount with a missile weapon, or hand to hand weapon. Airsharks go into a frenzy with the taste of blood. This becomes a problem for a rider.

Air sharks need a rational for their ability to fly. The originals were described as having hydrogen bladders. Making them potentially explosive when attacked by fire. I chose to use a magical rational. I propose that Airsharks contain deposits of magical phlogiston flux. This a magically unstable, as any learned wizard will tell you. Attacking an Airshark with magic can cause unpredictable results at times, which is not so well known. 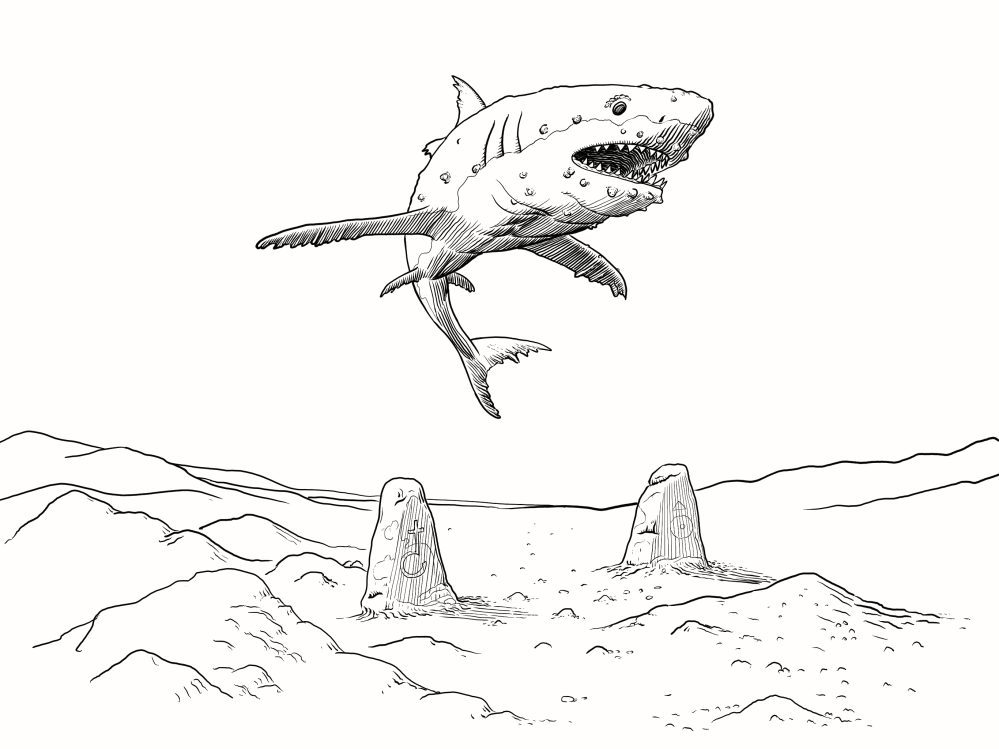 Air sharks are similar to normal sharks but fly through the air as a normal shark would swim through the water. The bodies of air sharks contain magical ether flux which allows them to fly. The ether flux is magically unstable making air sharks susceptible to magical attacks. Magic spells targeting an air shark have chance to cause odd magical effects.

Air sharks are sometimes ridden by creatures such as lizard men, goblins, and orcs. An air shark can support up to a medium rider.

Air sharks can attack with their bite. They are covered in a tough almost armor like skin with rough rasp like texture. This allows them a move by attack. Air sharks go into a frenzy in combat after tasting blood. Any time an air shark makes a successful bite attack there is a chance an Airshark may go into a raging frenzy.

When an Air shark fails a save vs magic roll d12

Blood Frenzy: The air shark has advantage on melee attack rolls against any creature that doesn’t have all its hit points.

Raging Frenzy: The air shark mindlessly attacks a single victim in a thrashing frenzy. It’s attacks are at +2, while it takes -4 to its AC. The air shark gets a free scraping attack (as a bonus action) on every creature adjacent to it. Roll 1 in 6 after each attack for the Airshark to enter a raging frenzy.

Scraping attack: This is a free attack taken as a move by. +3 to hit, one adjacent target. Hit: 4 (1d4+2) bludgeoning damage.

Blood Frenzy: The air shark has advantage on melee attack rolls against any creature that doesn’t have all its hit points. Water Breathing: The shark can breathe only underwater.